I heard from Joe again in about 1995, saying he had used fractal
mathematics to come up with a revolutionary speaker design that could
produce a “holographic” image, and would I be interested in delivering a
pair to renowned producer, Bill Laswell … - Ted Orr, Head Engineer Sertso Studio

DaS AuReality is a fundamental shift in
how loudspeakers operate!

This document sets out to describe this change.

The conventional loudspeaker, based on the invention by Kellogg and Rice in 1925, which they called a ‘cone’ speaker. Academics call it a `piston’ radiator. The piston radiator has one great flaw! Like a pebble dropped into a pond, the acoustic energy radiates out in perfect concentric rings.

Conventional Loudspeakers in a Listening Room

Opposite shows the two main problems with conventional loudspeakers in a room.

Recorded reflections in the audio are reproduced in the same way as the direct sound of the recording.

Because of the perfect concentric rings (like the pebble dropped in the pond) the only direction for sound to travel is outwards.

This means that both ears hear exactly the same sound.

Stereo attempts to overcome this but is severely limited by what can be achieve with the difference between left and right audio. 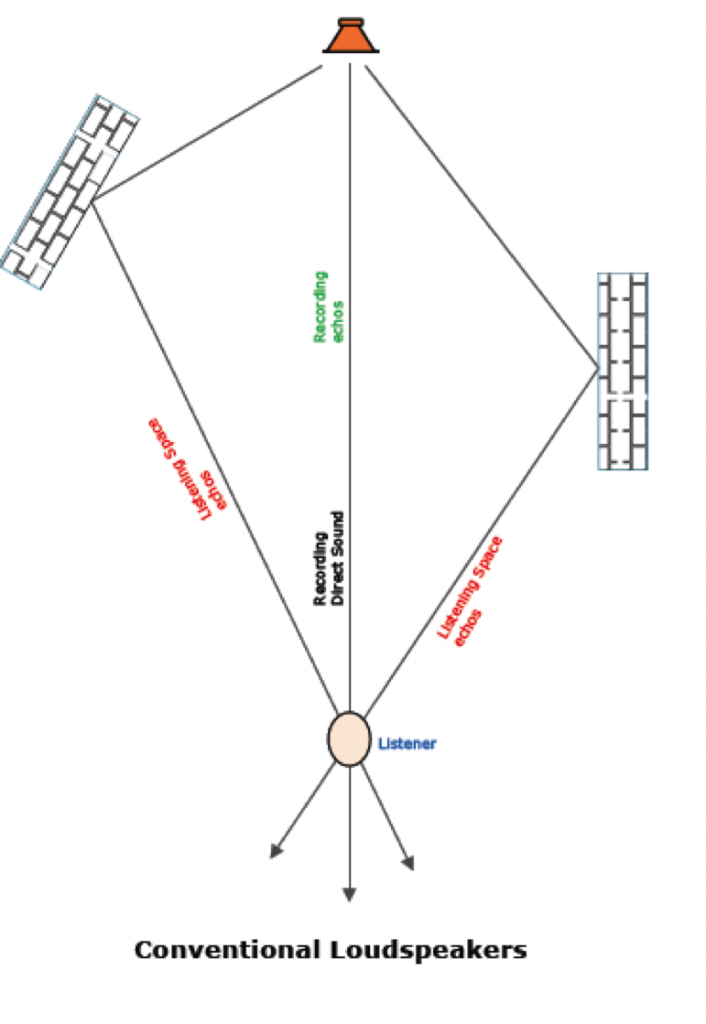 The combined effect of these two problems is to take the ‘reality’ out of the reproduced sound. It sounds like the musician are seated inside the loudspeaker.

These problems can be overcome through the exact science of designing an acoustic environment like a recording studio, or performance space, too, in part, manage these issues. But this is expensive and not always successful.

What DaS AuReality does that is different

So playing back recorded echos in the same direction as the recorded direct sound removes on of the biggest cues that a real sound would have – contralateral reflections (acoustic energy at right angles to the direct sound).

If we look at the listening room echoes in the bottom diagram, and imagine this being a person listening to a real musical instrument in a room, the room echoes come from the side. DaS AuReality does one fundamental thing. 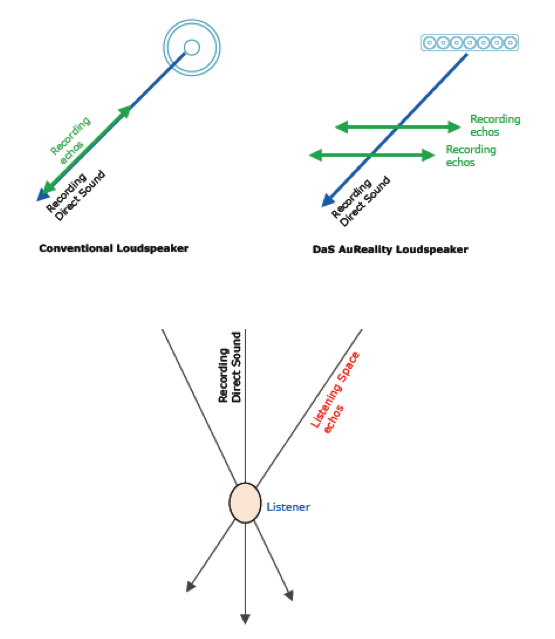 When an echo, caught by the recording process, is replayed it does so in the contralateral direction. Recorded echo play back at right angles to the recorded direct sound.

The listener can now sit in the DaS AuReality sound field and feel like they are in a real listening environment like being in the room with the actual musician. This solves problem 1. 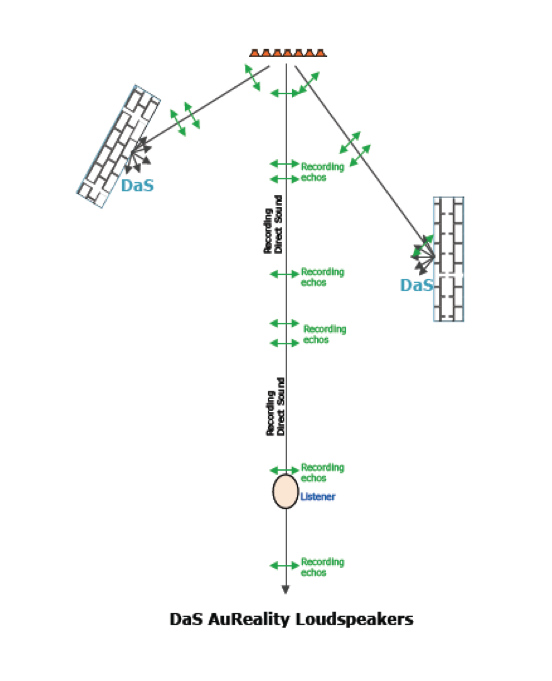 DaS AuReality overcomes problem 2 as well. Part of the process used to create the contralateral recorded echos involves very fine sequence of time delays at the source of the sound. At the loudspeaker!

We call this Diffusion at Source, and this is where the DaS acronym is derived. Das has little effect on the direct sound to the listener. This is good as this is the main communication channel from the sound source to the listener.

DaS AuReality is a novel loudspeaker technique that overcomes the legacy issues on conventional ‘cone’ loudspeakers. The benefits are a reproduction of a ‘real’ sound field that is just like listening to someone else in the room with you.

If you are a music lover then its like the band is in the room with you. If you are hard of hearing then the elimination of specular reflections, a known curse for the hearing impaired, allows for significantly increased intelligibility by the user. 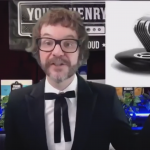 Win an AS8 with Delivered Live & support embattled musicians 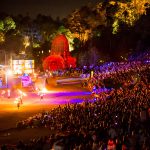